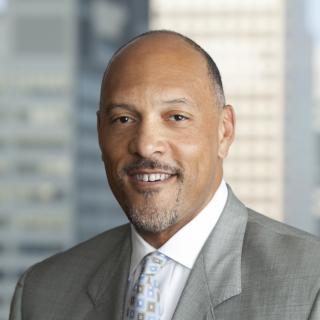 A History major and, among other undergrad activities, member of the basketball team, Barry has been an engaged alumnus. He’s served on Alumni Council, chairing its Professional Development Committee and serving on the Executive and Nomination and Governance Committees. He was a member of his Class Reunion Committee for their 35th.  He’s also been a longtime donor to the College.  More recently, Barry has served as co-lead of the Class of 1982 Racial Justice Initiative which supports internships at the Center for Social Impact and founded an endowment for the African and African America Studies Program. That endowment, the Academic Enrichment Fund, enables the AAAS Program to foster studies, programming and civil dialogue on race and racial injustice and promote anti-racist study, discovery, and models of academic and experiential learning. Currently, he’s a member of the executive committee for the Call to Lead Campaign. Meanwhile, Barry became an accomplished executive through a career traversing law, public service, trade association advocacy, nonprofit organization governance and years in the C-suite as a public affairs and communications, human resources, and legal executive. He resides in Washington, DC where he is a principal of an advisory services concern, and serves on a public company board and several nonprofit boards in the public education, energy and community engagement spaces. Last and certainly not least, he and his wife are the proud parents of a ’17.